This is the fourth in a series of articles focused on classic elements of change management content, updated and augmented with my own perspectives and experience. In the first post, Strategic Risk Factors, I have provided some of the history behind this series. The series is primarily written for change management practitioners, but I hope it will also be useful for others who are interested in making organizational changes more successful.

Every model of change I’ve ever run across pays attention to the fact that humans are sometimes uncomfortable with change and don’t always jump on board immediately. Resistance is a thing, and as practitioners we need to understand it and learn how to work with it.  In this post I want to share with you a classic model of resistance, and provide some commentary on how it might be most useful to today’s leaders and practitioners and where it might need some updating.

Here are the key elements of the model as I learned it nearly thirty years ago. I’ve seen various versions of it since then, but here is the “classic” I am most familiar with. This material is adapted from and used with permission of Conner Partners.

The Importance of Addressing Resistance

As organizations seek to implement major change, they often spend large amounts of money on purchasing effective solutions (hardware, software, and so forth) and often on training as well. But the reason that many changes fail to realize their planned goals has little to do with any of these factors. The “people” issues are the ones that most often get in the way. When individuals resist change, they may overtly refuse to do what they are being asked to do. More often, they simply go underground, drag their feet, or engage in other behaviors that divert attention from the positive progress of the change. The cost of resistance can be substantial — everything from cost overruns to schedule delays to project failure. It is therefore critical to understand and take steps to prevent or mitigate resistance.

Resistance is any opposition to a shift in the status quo. It occurs because people are control-oriented. When expectations are disrupted, their ability to control their lives is minimized and resistance is the result. Expectations are disrupted most often when people perceive more danger, less opportunity, or a greater amount of ambiguity in a situation than they anticipated.

Resistance is a natural and inevitable reaction to loss of control. Its occurrence doesn’t mean that something is wrong, it indicates that people are no longer able to operate as they expected to and they are uncomfortable.

Both positively and negatively perceived changes lead to disruption, so people will not just resist changes that they see as negative. When people resist change, they are resisting the loss of control caused by their expectations being disrupted. As disruption increases, so does resistance. Therefore, strong resistance will always be the companion of major (significantly disruptive) change, whether or not people say they “like” it.

Individuals resist change when, from their frame of reference, the change appears to go against their values, makes them or others they care about emotionally upset, the knowledge base that they believe in rejects it, or it would require a shift in one or more of their well‑established behavioral patterns. 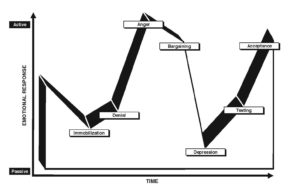 When individuals see a change as negative (undesirable), their resistance reactions go through a predictable cycle, depicted in this graphic. The model is based on Elizabeth Kubler-Ross’s work on responses to personal loss. 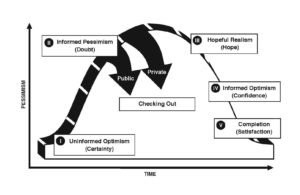 Individuals also go through predictable reactions to changes they perceive as positive (desirable). Resistance is at its greatest during the Informed Pessimism stage, when individuals may respond by “checking out” publicly or privately.

Individuals go through a process of committing to change. Commitment involves both cognitive and emotional reactions — these may proceed at different rates. This blog post outlines a model of change commitment. The primary point to remember with regard to resistance is that people don’t really resist change until they understand it.  Until they have moved past the Contact and Awareness stages, and into Understanding, they may display confusion, but they are not at the point where they are truly resisting.

Resistance can be expressed either overtly or covertly. From the organization’s perspective, overtly expressed resistance is far preferable, because it can be managed.

This perspective on resistance has what I think of as “stickiness.” That is, it tends to remain with people for a long time after they learn about it. I know people who still have the two “change curve” models on their wall years after taking a class that included them. Why?

The “Responses to Negatively Perceived Change” curve normalizes a range of reactions to change, and helps people recognize the connection between change and the things we know about grief and loss. It helps people create an emotional vocabulary of ways they and others might respond to change, and offers leaders and change agents a way to prepare responses to these common reactions.

The “Responses to Positively Perceived Change” curve provides a wake-up call to those of us who think that if we can just “sell” a change well enough—make it look highly attractive to participants—we will get quick and easy buy-in. It invites us to recall things we went into with high expectations (moves, new jobs, relationships, etc.) that later turned out to have hidden challenges. It also reminds us that if people are going to “flip” their perspective on a change from positive to negative (“checking out” in the terminology of the model), we’d rather have them do it openly rather than covertly, because we can only work with what we can see.

The connection to the Commitment process reminds us that behavior that appears to be resistance may simply be an individual’s way of getting enough information to decide how they think/feel about a change.

Finally, the “Prevention/Healing” comparison highlights the important difference between taking steps to gain buy-in up front and dealing with the negative aftermath of pushing a change through, and reminds us that if we are planning to introduce disruptive change, we need to recognize that there will be a cost.

I do have a few thoughts on potential updates to the model, and insights I’ve had over the years that might be helpful to practitioners.

The model does not make a clear distinction between resistance to change in general (i.e. the natural responses people have to uncertainty, disruption, and loss of control) and resistance to a specific change (which would also include disagreement about goals and approach, unhappiness about personal implications, etc.) We can at least partially solve for the “change in general” issues with clearer communication, opportunities for participation, and strong sponsorship; recent findings in brain science have also given us some clues about what’s going on underneath the surface in this area. The “specific change” issues, however, require much deeper dialogue regarding the nuts and bolts of the change, and often significant work to align individual and organizational interests. Both of these are a legitimate part of the change practitioner’s craft.

I also think it’s important to recognize that a single change can have multiple aspects, some of which are viewed positively and others negatively, which means that people are going through many overlapping cycles of emotional responses. We may want to look for neat patterns (OK, he doesn’t seem to be as angry now, so let’s get prepared for some bargaining…), but in fact we mostly need to know the range of potential reactions and respond to whatever comes up. I actually think this is an overlooked and very important part of the leader/sponsor role during change—being prepared to operate in an environment of emotional volatility and deal skillfully with a range of feelings that do not come up often in periods of stability.

Finally, and more radically, I think it’s time to step back and evaluate the paradigm of “resistance to change” that has become such a cornerstone of our thinking. It reflects some deeply-held assumptions about how change is implemented that I have begun to question. One of these is the assumption that change is defined and designed by a small group of people and then rolled out to the organization, where it meets with some sort of response or reaction that is either aligned or resistant. This almost always sets up a “they are doing it to me” mindset among people in the organization, and it potentially reflects an unconsciously held image of the participants in change as objects to be pushed, pulled, and communicated to rather than as living, breathing parts of the organizational system. This article illustrates the issue using a story from the martial art Aikido. When we can genuinely see all of the people in the organization as engaged in a shared quest, and find ways to engage everyone in searching for, testing, and putting into practice new and better ways of working to achieve the outcomes we value, we may find that what we currently call resistance is simply part of the natural tension that comes with bringing different perspectives together.

How have you been thinking about resistance to change? What insights, models, and approaches do you find most helpful?